The Importance of Being Able to Build Locally 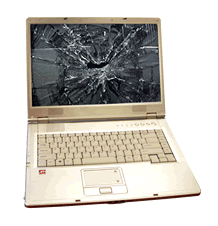 A little while back I wrote an article describing how to do continuous integration. But I left out one important step that happens before any code even enters the CI pipeline. A step so important, so fundamental, so obvious that you don’t realise it is there until it is missing.

You must be able to build and test your software locally, on your developer machine. And by “test” I don’t just mean unit test level, but acceptance tests as well.

I said it was obvious. But once in a while I do stumble across a project where this rule has been missed, and it leads to a world of unnecessary pain and discomfort for the team. So what happens when you cannot easily build and test anywhere apart from the pipeline?

Without being able to run tests locally, the development team is effectively coding blind. They cannot know whether the code they are writing is correct. Depending on where the dysfunction is - compile, unit test or acceptance test stage - the code checked in may or may not break the pipeline build. The Dirty Harry Checkin (“Feeling lucky, punk?”). So the pipeline is likely to break. A lot. Good pipeline discipline means broken builds are fixed quickly, or removed, so that other team members can check in code. But here lies the rub - since there is no local feedback, any fix is unlikely to be identified quickly - how can it be when every single change to fix it has to run through the CI pipeline first? The inevitable result - slow development.

Let’s look a little closer at what is going on. Whenever I see this anti-pattern, it is usually the acceptance tests that cannot be run [1] - they are generally difficult to set up, and/or too slow to run quickly, and/or too slow to deploy new code to test. Let’s apply this to a typical ATDD development cycle. we should all know what this looks like: 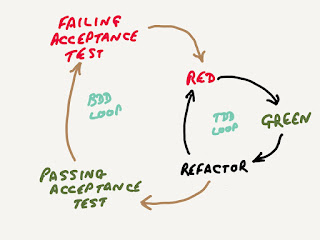 Now, let’s drop this development pattern into a system where the developers cannot run their acceptance tests locally and has a slow deployment. This happens: 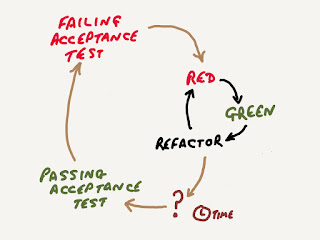 The only way to check whether the acceptance criteria are complete - i.e. the feature is Done - is to push the changes into the CI pipeline. Which takes time. In this time no-one else can deploy anything (or, at least shouldn’t if we don’t want complete chaos). Getting feedback on the state of the build becomes glacially slow. Which means fixing problems becomes equally delayed. So if, say, the feedback cycle takes 30 minutes, and you have mistakes in the acceptance criteria (remember, you cannot test locally, so don’t really know whether the software works as expected) every single mistake could take 30 minutes each, plus development time!

So how does being able to build locally fix this? Simple - if you can build and test locally, you know that changes being introduced into the CI pipeline most likely work.  Even if things are a bit slow. Also, instead of having a single channel to check the state of the build, every single development machine becomes a potential test system, so no waiting around for the pipeline to clear - just run it locally, and grab a coffee if needed, or even switch to your pair’s workstation if things are really that slow (clue: if things are that slow, spend the down time fixing it!).

I shall add one unexpected side effect of being able to build locally - it can be used as a poor-man's continuous integration pipeline. So if you have trouble commissioning servers to support a real pipeline (sadly there are still companies where this is the case - you know who you are!), with sufficient team discipline it is possible to use local builds as the main verification and validation mechanism. Simply make it a team norm to integrate and run all tests locally before checking in. It does introduces other risks, but it gives a team a fighting chance.

[1] If unit level tests have this problem, there is an even bigger problem. Trust me on this.